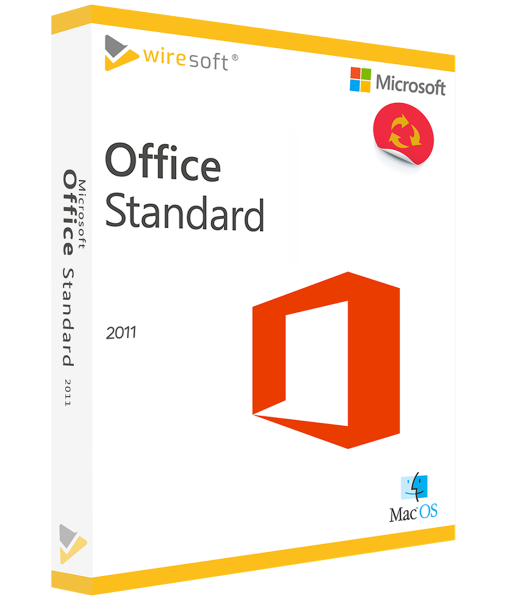 Microsoft Office 2011 is also on many Mac computers an indispensable component for daily work. With the release of this edition for Mac- are therefore in addition to the better compatibility of macOS with for practical collaboration in particular the general ease of use and also the extension of such functions in the foreground, which facilitate the use of the -programs also online. Mac can now take advantage of all the benefits offered by the classic programs , and : for creating professional documents in formats frequently used both professionally and privately, for fast formatting and analysis of extensive data, as well as for displaying and sharing informative presentations, also on the web.User Windows Office  User Office Word Excel PowerPoint

Microsoft Office for Mac 2011 Standard - more user-friendly than before

Microsoft Office is also an indispensable component for daily work on many Mac computers. With the release of this edition for MacUser, in addition to better compatibility of macOS with Windows for practical collaboration, the focus is therefore on general user-friendliness as well as the addition of such functions that facilitate the use of Office programs online as well.

Mac User can now take advantage of all the benefits offered by the classic Office programs Word, Excel and PowerPoint: for creating professional documents in formats frequently used both professionally and privately, for quick formatting and analysis of extensive data, as well as for displaying and sharing informative presentations, also on the web.

A brand new addition to Office for Mac is Outlook, which, with its many practical tools for organizing e-mail traffic as well as contacts and coordinating appointments, offers significant advantages over the previously included Entourage.

Visually, this Office version for Mac has a new look compared to the previous version, adopting the Windows typical ribbon look, more details below. In addition, there are a number of optimizations and advantages that make working with Office for Mac 2011 even more efficient and practical:

The typical ribbon bar known to Windows users is now also available on the Mac with this Office version. Typical functions are sorted thematically in individual bars or ribbons and are accessible via different tabs. Depending on the current activity in a program document, a thematically appropriate selection of tools and functions for editing is displayed to the User, for example for formatting Word texts or for editing images in a PowerPoint presentation.

The main advantage of the ribbon look is that suitable functions are now directly accessible and the User no longer has to search for them in various submenus.

In addition, the ribbons can also be customized.

However, if you still want to use the familiar user interface from the previous version, you can also hide the ribbon view and access the desired functions via the classic menu, which is still available.

Integrated functions for photo editing in Word, Excel and PowerPoint

The editing of images and graphics has been significantly facilitated by new functions in Word, Excel and PowerPoint as well as otherwise improved. To insert an image into a document, it is now sufficient to simply drag it with the mouse from Desktop or from a folder to the relevant location. The size can then be precisely adjusted or the format cropped. Additional functions are available for adjusting color tones and saturation or adding various effects and filters. It is also possible to adjust the degree of transparency. This makes it possible, for example, to use a photo as a full-page background illustration.

In the course of this, the creation of graphics has also been improved. For this purpose, the so-called SmartArts contain a number of graphic elements with which, for example, hierarchy diagrams or process flows in Excel can be visualized according to one's own needs.

Microsoft has also significantly expanded the portfolio of templates for the programs Word, Excel and PowerPoint in the Mac version 2011. The choice of a suitable template is made easier by the fact that the first page of each is displayed in the format overview. As soon as you move the mouse over a particular template, all the other pages are also displayed one after the other.

In Office 2011, support for Visual Basic, the powerful scripting language, returns for the Mac. This allows XML-based document formats to be created while preserving the VBA macro code. VBA on the Mac especially provides the ability for Office applications such as Excel, Word, Access etc. to use recurring tasks in an automated manner by programming them appropriately via macros.

In the Office package for Mac, Microsoft has linked the various programs with the Web Apps. Word-this means that Excel and PowerPoint documents can be edited online in the browser, regardless of the locally installed Office version or the respective operating system. The prerequisite is free registration with the Windows-Live services.

The Microsoft Messenger is also integrated in Office for Mac 2011. This allows users to communicate directly with colleagues without having to use the external chat functions. The Messenger also offers revised audio and video transmission.

Optimizations of the individual Office applications for Mac 2011

In addition to these general additions and improvements to the Office package for Mac 2011, the standard programs also have a number of new features to offer:

In addition to new templates, a number of newly integrated view options make working with Word even more practical:

Optimizations in Excel 2011 for Mac

Excel for Mac 2011 now includes features that were previously only available in the Windows version. This also allows a better exchange of data between both operating systems. These new features deserve special mention:

PowerPoint-Presentations can be designed even more practical with the Mac version 2011 as well as realized. The following functions are newly integrated:

The new Office for Mac version now also includes Outlook, which finally replaces the previous Entourage program. Outlook is used for comprehensive management and organization of

E-mails and appointments and offers the same comprehensive functions as the Windows version. When switching from Windows to the Mac, all data can be imported without any problems. Outlook 2011 offers these functionalities, among others:

Wiresoft offers the Standard-edition of Office 2011 for Mac for download - with these integrated programs:

When you purchase the Standard edition of Office 2011 for Mac, you will benefit from these advantages in addition to our low price for Used Software at Wiresoft:

For questions on software purchase of Microsoft Office 2011 for Mac Standard or other Microsoft software products available in Wiresoft store, just contact us via e-mail, phone or chat.