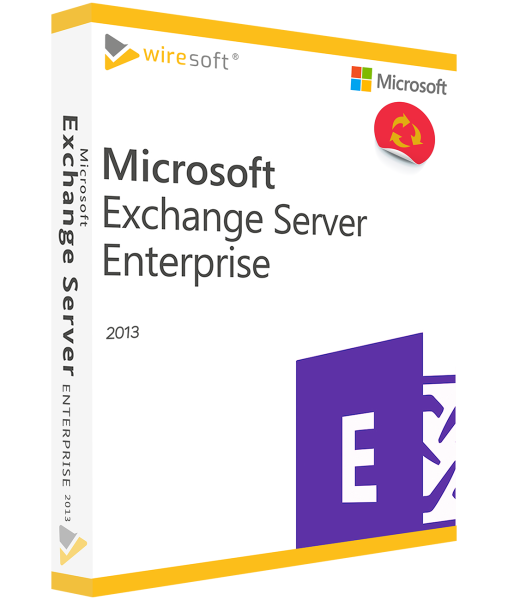 Compared to its predecessor, this product has many new services, features and technologies that are designed to support companies in terms of designing their communication channels. With this groupware and e-mail transportServer software, you are optimally equipped for productive collaboration. Look forward to improved results.

If you have any further questions about the product, please do not hesitate to contact our customer service.

Compared to its predecessor, the product has numerous new services, functions and technologies that are designed to support companies in terms of designing their communication channels. Thus, with this groupware and email transportServer software you'll be optimally equipped for productive collaboration. Look forward to improved results. We would also be happy to advise you on how you can best use Windows Exchange Server 2013 for yourself and your work. In addition, there are further functions that are only included in the Enterprise edition, such as journal decryption, powerful Data Loss Prevention (DLP), significantly enhanced ActiveSync Mobile Management policies and a dedicated mailbox archive. However, the latter requires Microsoft Office Professional Plus in versions 2007, 2010 or 2013.

General information about the purchase of Exchange Server 2013 Enterprise

You are probably wondering why you can buy Windows Exchange Server 2013 so cheaply from us! Microsoft Exchange Server 2013 Enterprise allows you to manage far more databases. While the Standard-edition is limited to five databases Pro Server , up to 50 databases per Server can be managed in the RTM version including the cumulative update 1 (CU1). In conjunction with the cumulative update 2 (CU2), even a maximum of 100 databases Pro Server can be managed. Furthermore, some additional features are integrated in the version for professional users, which are either not available at all or only to a limited extent in the Standard version. Thanks to a wide range of tools, Microsoft Exchange Server 2013 Enterprise simplifies work both in workgroups and at the global corporate level and helps to keep processes transparent, clear, cost-efficient and flexible.