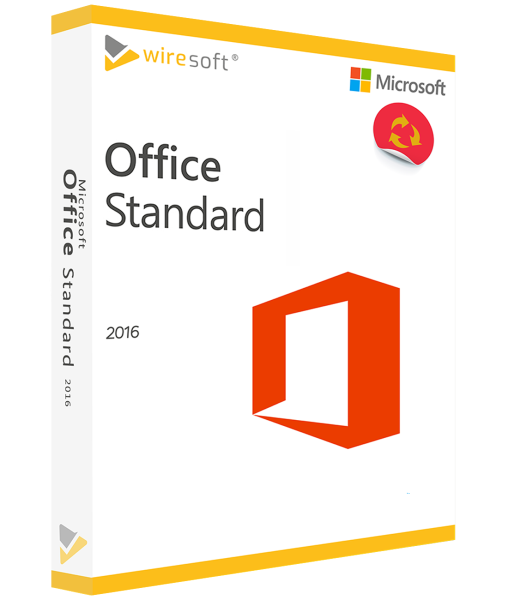 The Office-Edition 2016 Standard is designed to handle all typical tasks of the modern Business-everyday life - and much more: Many practical, intuitively usable tools facilitate the use of the individual programs. which accelerates the completion of projects even more. Especially the edition Office 2016 Standard offers here by the integration of the DTP program Publisher 2016 a clear Plus at application possibilities in relation to other editions - with it a multiplicity of publications for all target groups can be provided professionally: from Business-Mailing up to more extensive advertising catalogs.

The Office edition 2016 Standard is designed to handle all typical tasks of the modern Business everyday life - and much more: Many practical, intuitively usable tools facilitate the use of the individual programs. which accelerates the completion of projects even more. The Office 2016 Standard edition in particular offers a significant Plus of application options here compared to other editions thanks to the integration of the Publisher 2016 DTP program - this means that a wide range of publications can be professionally created for all target groups: from Business-mailing to more extensive advertising catalogs.

All programs included in Office 2016 Standard:

The Microsoft Office 2016 Standard Edition is not available in regular stores for individual customers, but only as a volume license, as used in larger companies. At Wiresoft, however, private users as well as self-employed persons and SMEs can also purchase the Office edition Standard 2016. This differs from the common editions Home & Student or Home & Business by the layout program Publisher.

The purchase of a 2016 edition also has the particular advantage that it is supported by older Microsoft operating systems from Windows 7 - an important, purchase-deciding feature for buyers who continue to use this or a successor version. In addition to the 2016 version of Office 2016 Standard as a purchase version (no subscription!), you can also obtain the edition Professional Pro in the Wiresoft online store. The following overview provides a detailed presentation of all individual programs included in Office 2016 Standard.

Office 2016 Standard includes some new features in the Standard-programs, which should support users in a useful way:

The individual programs included in the Office 2016 Standard edition also offer a whole range of improvements and new functions:

The Word program included in Office 2016 Standard contains optimizations of existing functions as well as some new tools. In particular, these make collaborative work in Team on Word documents even more efficient - whether in Office or online in Cloud. In addition, however, there are even more templates in Word 2016 as well as the particularly practical function of opening a PDF document directly in the program:

In addition, Excel in Office 2016 Standard offers some new calculation types such as the PROGNOSE.ETS function, which now also generates short-term alternative future forecasts including best & worst cases. Interactive charts in pivot tables offer with the newly integrated Business Intelligence functions, among others, drill-down navigation as known from Online Analytical Processing (OLAP). The new LET function improves computing power and combinability in Excel 2016: within a formula, it can be used to name individual ranges. The new view filter allows you to hide other collaborators' sorts and filters in a worksheet and show only your own.

The 2016 version of PowerPoint expands options in presentation slide design with new tools, animations and graphics, as well as options in time management:

Outlook 2016 has a number of new features that primarily help users to efficiently manage the daily flood of e-mails, as well as to find content, contacts and documents even faster; sending file attachments is also now even easier and faster:

Last, but not least, Office 2016 Standard also includes OneNote, the popular digital notebook that can be used almost anywhere thanks to its versatility and can be used especially on

Smartphones and tablets to take, edit and share notes from anywhere.

Publisher is the handy Office program for creating a variety of media for online or print. This publishing software is a special component of MS Office 2016 Standard and is not included in Home & Student or Home & Business.

The user-friendly interface offers a clear arrangement of all important functions. The intuitively usable tools support both inexperienced and professional users in the layout of demanding documents as well as in image editing to achieve optimal results. Text and images can be visually modified with image effects such as shadows, luminescence, 3D and reflections. A separate column in the design area is available for editing multiple images. These can then be exchanged intuitively using drag & drop. And especially for digital printing with an online photo service, documents created in Publisher can also be saved as JPG format.

Important functions and features of Publisher 2016 are:

MS Office Standard is available in a 32-bit and a 64-bit version. The 64-bit version is normally installed automatically - on a 32-bit operating system with x86 processor only the 32-bit version can be installed. Depending upon it individual hardware requirements deviate thereby from each other - in particular with the work and non removable disk memory. The following minimum requirements must be observed:

The edition MS Office 2016 Standard is not available in the usual trade, but only as a volume license for companies. In the Wiresoft online store, the Office 2016 Standard software is also available individually, as a purchase version and without obligations as in the case of a subscription with software updates; therefore, when purchasing from Wiresoft, only the one-time costs are incurred. You purchase the full version of the program, with identical scope of programs and functions as the volume license offers, the only difference is that this Office 2016 Standard package is a single license that is used exclusively by you.

Secure software purchase with Wiresoft: Buying Office 2016 Standard or any other Office 2016 edition at Wiresoft is not only particularly cheap and convenient, but also secure: this Office 2016 Standard software is a single-user license, which was part of a larger volume license, as it can usually be purchased and used only by larger companies. When purchasing a volume license, these companies also have the right to resell surplus software licenses - e.g. to Wiresoft. It does not play a role whether these licenses were not used, or whether the Office-software concerned by a newer program version was replaced and/or by a general adjustment of the hardware or an update of the operating system in an enterprise no longer supported. Through the sale, the volume license can be dissolved and converted into individual licenses - these are then referred to as used software. The splitting into individual licenses has no effect on the scope of the programs or their functionality; moreover, software is not subject to wear and tear through use.

Wiresoft sells only such program full versions of MS Office Standard or other Microsoft programs that are identical to the original Microsoft versions or editions; furthermore, these come only from legal sources of first-time buyers located in Europe.

Therefore, when purchasing Office 2016 Standard as used software from the Wiresoft software store, you do not run any legal risk, because the trade of used software is expressly permitted by law, which has also been confirmed by numerous judgments.

This Office 2016 Standard software can be installed on your PC immediately after the purchase process is complete and the download is complete, and it can be activated with the volume license key - Multi-Activation-Key (MAK) - supplied with the purchase and used without any time or other restrictions.

The software purchase of Microsoft Office -packages is for Wiresoft customers an economical possibility, in order to be able to buy such normally not available programs besides particularly favorably. Therefore, especially self-employed and private users, but also SMEs benefit from our favorable software offer: with Wiresoft they not only receive all exclusive advantages of the Office 2016 Standard Edition, but also save money when buying!