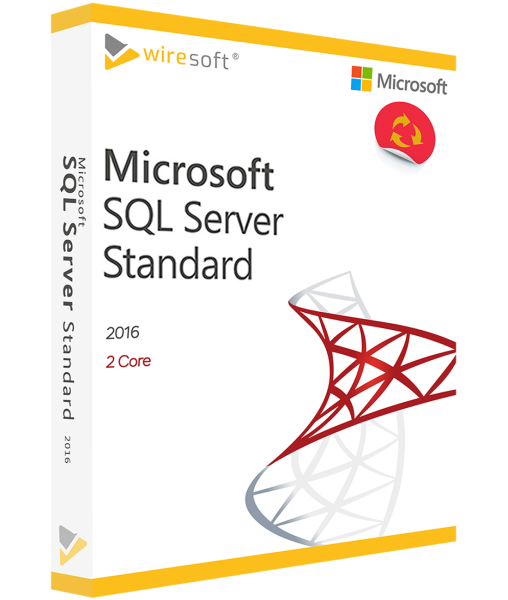 The SQL Server 2016 Standard 2-Core  edition provides enterprises with a reliable scalable as well as hybrid relational database platform to build intelligent applications for Desktop, Server and the web, supported by its high scalability and performance as well as advanced security features.

The SQL Server 2016 Standard 2-Core edition provides enterprises with a reliable scalable as well as hybrid relational database platform to build intelligent applications for Desktop, Server and the web, supported by its high scalability and performance as well as advanced security features.

This edition offers many new features for in-database queries and analytics, including Hadoop and Cloud integration as well as real-time and R analytics, supported by Advanced Analytics capabilities. Furthermore, in-memory performance, support for JSON (JavaScript Object Notation) as well as PolyBase for Transact-SQL queries and new Hybrid Cloud scenarios should be mentioned briefly, so that companies receive even more detailed results, which can be published as reports on many end devices with the diverse visualization options.

At Wiresoft, SQL Server 2016 Standard 2-Core is available as used software - at a lower price than new - with older versions of SQL Server like this regularly discontinued. As used software, this Core-based SQL Server license can be used to its full extent with the maximum scalability, performance and security typical of the edition and is therefore particularly attractive for companies and organizations that use more powerful Server and for which the alternative CAL-based licensing is therefore not an option. Licensing of Microsoft SQL Server 2016 Standard 2-Core is done according to the official Microsoft license management terms. For detailed information on new enhancements and new features included in SQL Server 2016 Standard and your optimal licensing, please see the following text.

the transformation of business-critical applications into intelligent applications - among other things through higher scalability for up to 24 cores. The integration of open source R also extends the possibilities for data analysis; in addition, users benefit from many Business intelligence and development tools that are also available in the Cloud. Below is more information on the functional areas of the SQL Server-Version 2016 Standard 2-Core.

The features built into In-Memory OLTP improve performance when processing workloads as well as transactions, and are responsible for significant performance gains through memory optimization including

SQL Server Analysis Services (SSAS) in the 2016 version offers many improvements in performance and functionalities including:

Important new features in SQL Server 2016 in SSIS are:

Master Data Services (MDS)is used to efficiently manage the master data sets of an organization. In SQL Server 2016, the following options are available here, among others:

The SQL Server Reporting Services (SSRS) are used to create as well as provide or manage mobile or paginated reports, including:

The 2016 version of Microsoft SQL Server offers the following security feature enhancements, among others:

The following information relates to scalability, performance, and features available for individual components.

Other features of the SQL Server 2016 version

With the SQL Server 2016 version, Microsoft introduced the Core licensing described here, which is also available for the Standard edition of SQL Server 2016 and is described below. In contrast to older SQL Server versions, here the number of cores Pro processor forms the basis for the exact licensing of a SQL Server; each physical Core of the server requires its own license, whereby cores are always only licensed in pairs.

The total need of Core licenses for the SQL Server results from the maximum number of cores, basically Microsoft takes as a basis a minimum of 8 licenses Pro Server - so the following conditions apply:

These Microsoft license terms also apply to used software. If you have any questions about your correct licensing with SQL Server 2016 Standard 2-Core packages, please feel free to contact us.

With our offer of used software such as SQL Server 2016 Standard 2-Core license you can be sure that it offers the same possibilities as the corresponding new server license software - on the one hand because software cannot wear out, on the other hand also regarding its functionality as well as the legality of its usability. Here you can find all answers to frequently asked questions about used SQL Server software.

Where does Wiresoft SQL Server used software come from at 2016 Standard 2-Core?

The used software for SQL Server 2016 offered in the Wiresoft software store usually comes from those companies that first purchased the original software new and resold it to Wiresoft - common reasons are because there are surplus, unused licenses or this software has been replaced by another version or type and is therefore no longer used. At Wiresoft such licenses are therefore marked as used software, but in principle they can be used like a new license.

Yes: When purchasing Wiresoft used software such as the SQL Server 2016 Standard 2-Core license, our customers have the same advantages as when purchasing new Server software: Buyer security through immediate download and immediate license activation via the supplied valid license Key.

Is the trade with or the use of used software with SQL Server 2016 Standard 2-Core legal?

Yes: For the trade with used software as well as for its actual use, the corresponding jurisdiction applies, which allows both as legal - this has been confirmed several times by various court rulings. The used software offered at Wiresoft originates from license inventories of companies.

Does Wiresoft Used Software have other advantages?

Yes: The Wiresoft Used Software gives our customers the opportunity to either supplement or update their respective software inventories at a favorable price, because the prices are significantly lower than those of comparable new software. In the Wiresoft software store, many older versions of Server licenses are also available, which are no longer offered new, so that customers can avoid more expensive upgrades. Wiresoft Used software has by the complete proof of all buyers thereby the further advantage that it offers also audit security!

The Wiresoft used software offer includes not only SQL Server software such as the 2016 Standard 2-Core Edition, but also the alternative licensing with CALs as well as newer versions of SQL Server - at a favorable advantage price. Here you can also find offers for many other Microsoft programs - with all the benefits mentioned above. If you have any questions regarding your licensing of SQL Server 2016 Standard 2-Core or any other form of licensing, please do not hesitate to contact us via chat, e-mail or phone.