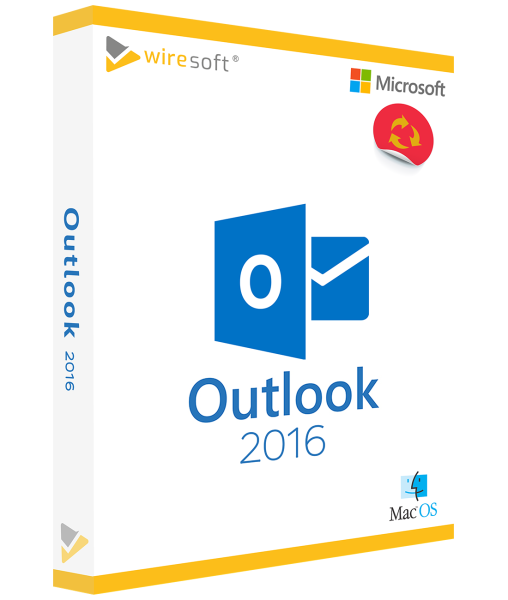 Microsoft Outlook for Mac 2016 is still a much-used version of the proven -program, with which not only the daily email traffic, but also contacts, appointments and tasks can be centrally managed and organized to bring more efficiency into the -everyday life. Office Business Outlook for Mac 2016 is characterized by a wide range of practical features and useful functions that support productivity in the office: Professionals as well as beginners are supported in completing all daily tasks even more easily. Extensive search options, for example, help manage many emails, content and contacts. In particular, the frequent sending of file attachments is not only faster with for Mac 2016 thanks to a range of new options, but is also more secure. Another new feature is the possibility to assign individual rights for the sent files to single addressees. Outlook

Microsoft Outlook for Mac 2016 is still a much used version of the proven Office-program, with which not only the daily email traffic, but also contacts, appointments and tasks can be centrally managed and organized to bring more efficiency into the Business-everyday life.

Outlook for Mac 2016 is characterized by a wide range of practical features and useful functions that support productivity in the office: Professionals as well as beginners are supported in completing all daily tasks even more easily. Extensive search options, for example, help manage many emails, content and contacts. In particular, the frequent sending of file attachments is not only faster with Outlook for Mac 2016 thanks to a range of new options, but is also more secure. Another new feature is the ability to assign individual rights for the sent files to individual addressees.

MS Outlook for Mac 2016 can be purchased from Wiresoft as a standalone program at a reasonable price - in regular stores it is otherwise available almost exclusively as part of the Office version for Mac 2016. In addition, you can find not only the 2016 version of Outlook for Mac in the Wiresoft online store, but also older or the latest edition of the email software.

Important and practical new features of Outlook for Mac 2016

Mac User, who like to use Outlook to organize emails, contacts and appointments, will benefit from the new features described below as well as improvements to existing features. These not only help users get a better handle on the daily flood of emails, but also make managing content and documents much faster. Coordination of tasks can also be managed even more efficiently.

Smart search folders to find emails and other content instantly

By setting up a virtual search folder, Mac-User can filter out emails or other items in Outlook 2016 and display them in their own folder that match a certain predefined search criterion. One possible application, for example, is to display all unread e-mails in a Outlook mailbox that have been automatically saved in different folders. Similarly, an intelligent search folder can be used to search for specific groups of people and contacts.

Using the drop-down list "New search range", the search can also be changed, thus changing the current folder or mailbox.

Improved clarity when searching for attachments

Outlook for Mac 2016 now offers a better overview than before when searching for files that are sent as attachments to an e-mail: Simply click on "Attach file" and the sender of a message is shown a list of all files that were last used. If the list contains the appropriate file, then this can be attached immediately with a further click. In many cases, this feature eliminates the more cumbersome search in folder structures. For each attachment there is also a drop-down menu with various functions available to open, save, copy or delete it with just one click.

Sending emails with larger attachments has also become even more convenient with Outlook for Mac 2016 - provided a Mac-User uses the Microsoft file hosting service OneDrive. Each file that is available there no longer needs to be uploaded anew as an attachment in an e-mail, but it is sufficient to copy a corresponding link into the mail. This significantly speeds up the process of sending large file attachments, and also greatly reduces the amount of data in the e-mail inbox. All files stored in OneDrive can also be assigned individually defined rights (e.g. read, edit, etc.) for the individual addressees.

Microsoft has also modernized the user interface in Outlook for Mac 2016 so that it now looks similar to the Windows version of Office - this has the advantage that User can find its way around more easily on different end devices. Outlook as well as the other Office programs in the 2016 version also better support typical Mac features and functions, such as the high-resolution Retina display, full-screen mode and also multi-touch gestures. As part of the unification of the look, Outlook has also been optimized for touch operation, so that the program can be operated by integrating swipe gestures - so-called swipes. The gestures "Swipe left" and "Swipe right" can be assigned for the following actions: "Mark as read", "Delete", "Flag", "Archive" and "None".

Sorting e-mails often takes up a large part of daily office work, as mailboxes are increasingly clogged with unimportant messages or even spam, making it complicated to keep track of them - this is where the "Clutter" tool comes to the rescue, as it independently separates important from unimportant e-mails as they arrive and automatically sorts the latter into their own "junk e-mail" folder. At the same time, potentially dangerous content, such as harmful links or attachments, is detected and deactivated.

To ensure that any incorrectly sorted e-mails are not overlooked, Outlook sends a daily summary of all e-mails stored there.

Clutter also "reads" a user's behavior by registering which emails are opened first, which are read later, and which are ignored completely. In this way, the program learns on its own, so that it automatically improves the search filters and criteria more and more.

In order for the sender of an e-mail to be able to track whether the recipient has received and also read it, Outlook for Mac 2016 offers a delivery confirmation in the first case that the e-mail in question was actually delivered to a specific mailbox, and in the second case a read confirmation in the form of a short message to the sender when the e-mail was opened.

Use e-mail templates for similar or Standard messages

Daily e-mail traffic often consists of messages sent by default, the content of which changes only slightly, e.g. a new date, etc. Instead of composing such mails every time, templates can be composed and saved for this purpose in Outlook for Mac 2016, which then only need to be updated as needed before sending.

Outlook for Mac 2016 now has the ability to send emails on a delayed basis. With the "Send later" option, a specific date as well as a time can be set for sending, which is also after work hours, for example. The corresponding e-mails are therefore sent even when Outlook is no longer open on the computer.

Other practical auxiliary tools and features in Outlook for Mac 2016

Especially when User has to organize and manage a large number of projects, the following tools also make daily work easier and faster:

System requirements for using Microsoft Outlook 2016 on a Mac

The information listed below represents the minimum requirements to use Outlook for Mac 2016 on an Apple device. Outlook 2016 for Mac is only available as a 64-bit application.

This is what Outlook for Mac 2016 offers in contrast to the PC version:

The Mac version of Outlook 2016 has the following features in contrast to the Windows version:

Outlook forMac 2016, as a typical part of a Office suite, is not normally available individually from Microsoft. However, in the Wiresoft software store you can buy Outlook for Mac 2016 as a single purchase version - in contrast to most other sellers of Microsoft software, who often only offer the program as a subscription version individually.

Buying software with Wiresoft therefore means: benefiting twice, because you get the Outlook for Mac 2016 individually without the Office suite, and that too at a really low price! Smaller companies, for which a volume license does not make sense, but also self-employed persons and private users of Outlook can cover their need for Microsoft programs particularly economically when buying software at Wiresoft.

These are your advantages when purchasing Outlook for Mac 2016 as a single user license:

Buying software with Wiresoft is a safe bet: The used software offered by Wiresoft is either part of a larger volume license or a so-called used software - and in any case an absolutely legal product - and therefore without any risk for you: Because the European legislator has explicitly allowed the trade with used software! This is no longer used by the previous buyer and was therefore uninstalled, so that it can now be reinstalled and used normally.

In addition, each Microsoft program offered for sale at Wiresoft has been tested before sale for its actual usability, which is unrestricted in functions and duration, so that after activation it can be used on your PC like any conventional Microsoft software product. The Microsoft program full version purchased by you is identical to the corresponding versions and editions available in conventional trade.

In the Wiresoft software store you can find Outlook for Mac 2016 and its further versions as well as the other Office programs for Mac for sale, as well as many other Microsoft programs as Mac versions.

If you have any questions about Outlook for Mac 2016 or any other program, please feel free to contact us via email, phone or chat.