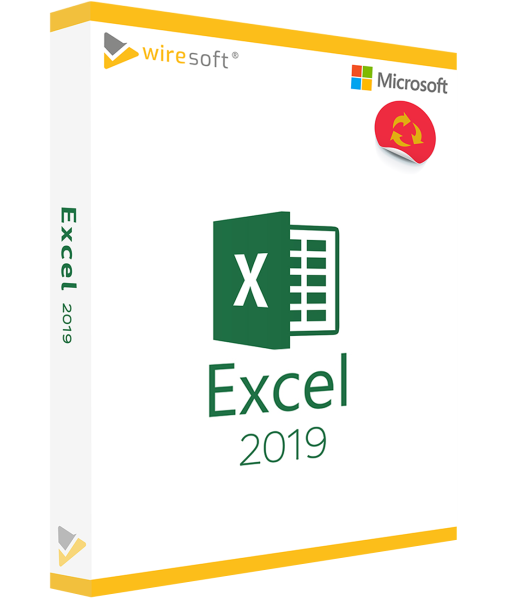 Microsoft Excel is also in the current version 2019 the so far unsurpassed spreadsheet software for the creation of complex commercial and statistical calculations, supplemented by a variety of functions that also allow logical as well as business mathematical calculations and the use of pivot tables. The analysis results can be presented in an informative and clear way through a wide selection of chart types. Excel for this purpose, 2019 works together with PowerBI, the powerful business analysis service from Microsoft, which also enables the direct export of data to other environments.

Microsoft Excel is also in the current version 2019 the so far unsurpassed spreadsheet software for the creation of complex commercial and statistical calculations, supplemented by a variety of functions that also allow logical as well as economic mathematical calculations and the use of pivot tables. The analysis results can be presented in an informative and clear manner through a wide selection of chart types. Excel for this purpose, 2019 works together with PowerBI, the powerful business analysis service from Microsoft, which also enables the direct export of data to other environments.

With Microsoft Excel 2019, even more extensive or even more complex calculations are possible by means of extended formulas and new functions in the concatenation and selection of data. Important data can be marked in color to highlight them. New diagrams offer more options for graphical representation.

The available Microsoft Excel Online can be used with all common browsers, allowing the creation of tables and editing of data in real time as well as sharing with other users. Improved touch support makes it easier to use Excel on tablets or smartphones as well.

In addition, there are new tools such as freehand drawing and improved options for easy creation of accessible tables and workbooks.

Using Cloud services, sharing documents with other users for collaboration is quite straightforward.

By the way, to use Excel 2019 on your computer or other device, you need to install Windows 10. In the Wiresoft online store, you can obtain not only the current Word Excel version 2019, but also its predecessor and other Office programs at particularly low prices as a single-user version, without a software subscription. All important new features in Word 2019 can be found in the following overview.

Overview of the new Excel features in version 2019

Excel 2019 contains not only improvements of the previous version, but also many new features, some of which were previously only included in the subscription model Office 365 - these are now also available in the purchase version.

For linking tables to advanced queries, Excel 2019 has been enhanced with some new handy features:

PivotTable, the powerful Excel tool for analyzing and evaluating large amounts of data, including the clear presentation of results in documents, has been enhanced in the 2019 version with several more practical functions:

For analyses and reports, a number of additional diagrams as well as three-dimensional models are now available in Excel 2019 to cover even more areas during evaluations.

In addition to the specific Excel functions, there are also a number of other features in Excel 2019 that are also available in other Office programs.

Freehand tool for writing and drawing

A number of new freehand functions and effects are now also available in Excel 2019. The new Freehand Drawing tool can be used not only by pen input and touch operation, but also with the computer mouse to mark areas or insert and edit formulas or self-drawn diagrams.

Improved as well as new features are also available in Excel 2019 to optimize content so that it is easier to read and edit for users with disabilities. The supporting error correction suggests improvements here after activation, integrated features include the following:

Other features in Excel 2019

Other new features also make working with Excel even easier in Team:

MS Excel is an indispensable, integral part of the Microsoft Office suite. At Wiresoft you do not have to purchase the Excel-Version 2019 as part of the corresponding Office-Suite, but you can also buy the software as a single program - in contrast to many other software providers.

Your advantage: With the single User license, you do not have to enter into a long-term, expensive subscription commitment or accept a time limit on use. Therefore, it is worth buying Excel 2019 from Wiresoft as a standalone program, because then you also do not have to download any paid updates.

This standalone Excel single-user license is identical in terms of functionality to Excel, which is also included in Office Suite 2019. This means that even smaller companies or freelancers can benefit from the advantages of Excel 2019 and save money in the process - because the single-user software is particularly inexpensive at Wiresoft in addition.

Not only Excel, but also all other Microsoft software licenses that you can buy in the Wiresoft software store are original Microsoft products. They often originate from a volume license or have been re-released by a company, which neither limits their usability nor enters a legal gray area. With the sale to Wiresoft, the previously installed software has been deleted and is therefore free again and usable by another User. Furthermore, as a reputable software dealer, Wiresoft only offers full versions that are unlimited and 100% usable.

If you have any questions about Excel 2019 or any other Office program, you can also benefit from our competent advice via email, phone and chat.