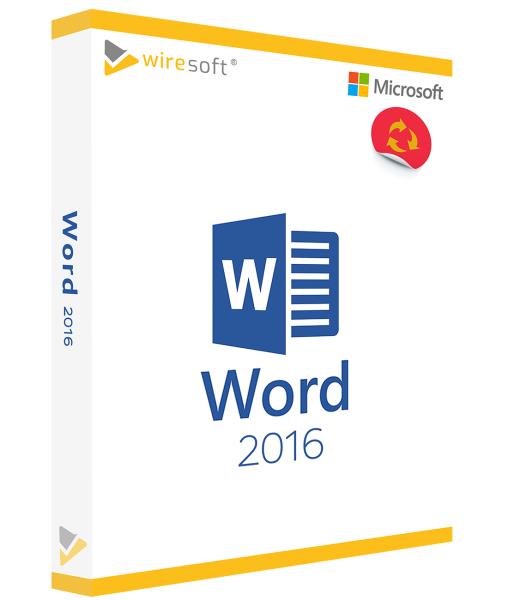 Word 2016 is a -optimized version of the proven classic word processing software from . The wide range of functions, combined with the high level of user-friendliness, makes 2016 an indispensable tool for the professional creation of texts - not only for daily use in the office, but also at school, in studies and at home. Thanks to the large selection of format templates and the many intuitively usable wizards, even inexperienced users can create attractively designed text documents with 2016 - from extensive business reports and documents to letters, contracts, essays, papers and invitations, and many more. Cloud Microsoft Word Word

Word 2016 is a Cloud-optimized version of the proven classic word processing software from Microsoft. The wide range of functions, combined with the high level of user-friendliness, makes Word 2016 an indispensable tool for the professional creation of texts - not only for daily use in the office, but also at school, university and at home. Thanks to the large selection of format templates and the many intuitively usable wizards, even inexperienced users can create attractively designed text documents with Word 2016 - from extensive business reports and documents to letters, contracts, essays, papers and invitations, and many more.

New diagram types expand the options for adding clear graphics to Word texts, while the integrated spell checker and new wizards such as the "Insights" and "Tell Me" functions offer a high level of convenience - for professionals and beginners alike.

Word above all,2016 also represents a further major step in more efficient collaboration on texts in Team: This is ensured by various Cloud features, with an improved version history as well as the possibility of assigning read and usage rights directly within a Word document. Added to this is the optimized touch function, with which the word processing software can also be used on tablets and smartphones.

The improved cooperation with Windows 10 extends in addition the range of the different Windows operating systems, with which Word 2016 can be used, straight also by the compatibility with Windows 7 is this Word-Version in particular also still on older computers usable.

Microsoft Word 2016 is typically part of the corresponding Office package and as such usually not available for purchase separately - however, at Wiresoft you can purchase the program at a reasonable price as a single User version. With the purchase you get a powerful version of the proven word processing software, which has the additional advantage that you can use it indefinitely without any mandatory updates.

Word 2016 differs from the previous version not only by further optimizations of the existing features, but also by some new functions. These are aimed in particular at making collaborative work on a Word document in Team, including in Cloud, even more productive and efficient, including the following features:

In addition to these Team-supporting features, Word 2016 also offers further proven functions and additions for the graphic design of text documents or the transfer of content from documents other than Word:

Word 2016 also contains various new functions that provide useful support for users working with texts; some of these are also available across programs in other Office applications such as Excel, PowerPoint, etc., and in particular improve efficiency when creating texts.

An operating assistant called "Tell Me" ("You wish") is now integrated in the ribbon of Word 2016, which is indicated by an icon in the form of a light bulb, and is particularly practical as a help for beginners or newcomers. To use the feature, a User simply writes what they want to do in a Word document in the input field located next to the light bulb, and "Tell Me" explains where the function in question is located or, in the case of more complex questions, offers further assistance to perform the desired action.

If, while writing or reading a Word document, a User user wants to obtain further information or even an explanation for individual terms or specifications, he no longer has to click away from the Word program to switch to the Internet and search for results there. Now it is sufficient to mark the respective term or the like only with the mouse and to activate the Bing-supported intelligent search by click. Matching search results are displayed with "Insights" directly in the Word window on the side.

Word-Documents can now be shared with others even faster and easier: To do so, User only needs to click on "Share" in the ribbon and select the desired options from those available. Here individual rights for reading or also for writing etc. can be assigned for the individual addressees.

"Version History" for collaboration in Word

When working together on a Word document - especially if this is done simultaneously in Cloud - it is important to keep track of all changes made by the various participants in the text. The version history is an indispensable basis for this. With the "Version History" function, earlier text versions also remain available: It displays older editing states and also makes them available for editing again.

In Word 2016, users can also choose from a number of diagram types newly integrated into Office, which can be used to illustrate statistical information in a text. In addition to TreeMap, waterfall and Pareto (column) diagrams, these also include diagram types such as histograms as well as sunburst and box diagrams, which are particularly well suited to visualizing hierarchical or economic calculations.

Integration of OneDrive in Word 2016

Microsoft OneDrive is a versatile cloud storage for web-based file sharing that can now be used in Word 2016. Users can store documents in OneDrive Word to access them from anywhere and from any appropriate device. OneDrive thus also enables collaborative online work on Word files, across all locations.

Data Loss Protection (DLP) is the proven tool from Microsoft, which defines and applies effective policies to prevent data loss. DLP is now available in Word 2016 for all documents via SharePoint Online and OneDrive for Business. Administrators use Data Loss Protection to set policies that protect sensitive data in documents in particular. For example, when a potential security risk is detected, DLP indicates this to a User with appropriate notifications and can also prevent disclosure.

Word 2016 is available in a 32-bit and a 64-bit version according to the associated Office package; individual hardware requirements may differ depending on the version.

MS Word is usually an integral part of the Microsoft Office packages and cannot be easily purchased separately. Unlike most other vendors of Microsoft software, you can buy Word version 2016 from Wiresoft online store as a standalone program: In doing so, you do not have to enter into any subscription obligations or observe any time limit when using the program. Therefore, the purchase of Word 2016 as a single program is also worthwhile in the long term, because you also do not have to download any paid updates later.

This Word 2016 Single User license is identical to the Word program, which is also integrated in the corresponding Office Suite 2016. The purchase of the single license of Word 2016 is therefore a cost-effective, economical alternative to the Office package, especially for those User who have no need for the other Office programs, for example freelancers, students or smaller companies, but who do not want to do without this classic word processing software.

With Word 2016 as well as all other Microsoft software licenses, which are offered in the Wiresoft software store, it concerns always original Microsoft products, which you can buy depending upon program also as single User full version. These usually come from volume licenses of companies or may have already been used. However, this does not cause any disadvantages for you as a buyer of used software in terms of usability. Every software product available at Wiresoft is purchased completely legally and can be downloaded and used immediately after payment. Any previous installation of an already used program by the previous owner has been deleted with the sale to Wiresoft, so it can be reinstalled and is 100% usable. Each Word license has therefore also been checked by Wiresoft for its actual usability. As a serious software dealer, Wiresoft also does not offer software for sale that is only valid for a limited period of time, nor is it a test version that can only be used to a limited extent.

You can also benefit from our competent advice on MS Word 2016 via e-mail, telephone and chat, or if you have any questions about purchasing any other Office software.